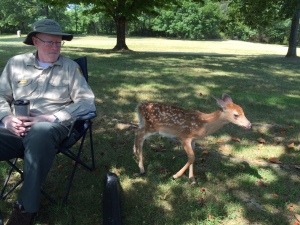 I first became involved as a Guide at Antietam National Battlefield through volunteering. After some rounds helping out at the Visitors’ Center desk, I started walking the fields more and more. A couple other volunteers started doing the same and after awhile three or four of us explored the fields together, comparing notes, asking questions, and enjoying the beauty that the field has to offer. These informal excursions usually involved food, and eventually breakfast or lunch at the local eatery called the Red Byrd was added to the itinerary. As volunteers, we also started posting ourselves at particular stops on the tour route. I chose to set up shop at Stop 5, the Philadelphia Brigade Park.

I did so for two reasons. First, the shade offered by the abundant trees at that part of the field kept me comfortable as I set out my camp chair, foldable table, and waited for visitors to amble by. In those days (about 15 years ago), posting at Stop 5 meant that maybe 15 visitors would come by in a six-hour period. Sitting there, I would see folks coming down from the Cornfield heading south along the Hagerstown Pike. They would slow down at the turn off to the Philadelphia Brigade, idle for a few seconds, and then continue on to the Sunken Road. Bus caravans wouldn’t even bother to slow down. It was a lonely volunteer post. But it gave me time to read and that was the second reason. Time spent reading under a maple tree pulls you chapter by chapter, article by article, into the Antietam narrative. At first occasionally and then regularly other volunteers would join me in the shade as the afternoon grew late. They would join the camp with their own foldable chairs and we would go into the early evening puzzling the mysteries of the field. END_OF_DOCUMENT_TOKEN_TO_BE_REPLACED

Antietam Battlefield Guides have returned to the field and are conducting tours. To protect the wellbeing of our employees and help curb the spread of the coronavirus (COVID-19), we are maintaining social distancing, using masks, and conducting our tours caravan style. To book a tour, please call the Antietam National Battlefield Museum Store at 301-432-4329. Note: Currently the Antietam Museum Bookstore is open Monday through Friday, 9:00 am to 3:00 pm, and Saturday and Sunday, 9:00 am to 4:00 pm.