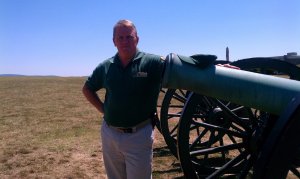 I once read a letter from a soldier who fought across the pastoral farmlands and harvest fields just outside of Sharpsburg, Maryland:

“To those who have not been witnesses of a great battle like this, where more than a hundred thousand men, armed with all the appliances of modern science and skill, are engaged in the work of slaughtering each other, it is impossible by the power of words to convey an adequate idea of its terrible sublimity. The constant booming of cannon, the ceaseless rattle and roar of musketry, the glimpses of galloping horsemen and marching infantry, now seen, now lost in the smoke, adding weirdness to terror, all together make up a combination of sights and sounds wholly indescribable”

How did this peaceful and seemingly safe place, tucked away in the gentle folds of western Maryland, become indescribable?

I am Martin Pritchett and I look forward to being your guide at the Antietam National Battlefield. I am from Kansas and a career Coast Guardsman that became interested in Civil War about 25 years ago. Life events brought me to nearby West Virginia and I began volunteering at the Antietam Battlefield where I spent seven years as a Battlefield Ambassador. Every weekend rain or shine, hot or cold, I could be found on the field assisting visitors in understanding the events that occurred here. Through constant study, mentoring and testing on an unparalleled scale under the auspices of the National Park Service, I became a Field Guide. Let us explore and discuss the most intriguing and influential campaign and battle of the American Civil War.

A campaign of wills; a campaign for the future of a country and of a people; a campaign that had the world holding its breath; the Maryland campaign and the Battle of Antietam are here for you to explore at your Antietam National Battlefield.