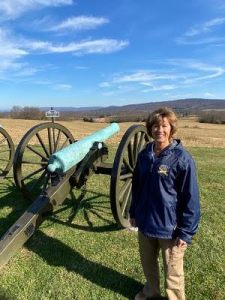 My introduction to Antietam began as a young girl living in nearby Hagerstown, when our family would pile in the car for family trips to the battlefield. My father, a WWII Navy veteran, was probably more interested in history than he thought his young daughters would want to hear, so instead we climbed the observation tower and played around the Dunker Church and Burnside Bridge. Years later, with a dose of high school history and hikes through the battlefield with my Explorer Post Scouting friends, I started to feel a tug that there was something special about Antietam. My friends felt it too, which led us on a late-night mission into the Sunken Road to detect whatever historical presence we thought we’d detect, though our nervous chatter over expecting to be expelled by a park ranger at any moment turned the event into something less somber than planned.

With college, ROTC and Army assignments, years passed without visiting Antietam, but I felt that tug again while stationed at Fort Hood, Texas in the 80’s.  A friend loaned me a copy of William Frassinito’s book, Antietam: A Photographic Legacy of America’s Bloodiest Day, which compared photographs taken while the dead still lay where they fell, to the same fields I had traipsed with my family and friends. While growing up, I remembered articles in the Hagerstown newspaper about the community’s fierce resistance to development around the battlefield. As a result, Antietam is one of the most well-preserved and restored battlefields you’ll find.  That’s something I hadn’t realized before, but the images in Frassanito’s book nearly took my breath away. You don’t have to use your imagination to see the battlefield through the eyes of those who fought there in 1862.  END_OF_DOCUMENT_TOKEN_TO_BE_REPLACED

Antietam Battlefield Guides have returned to the field and are conducting tours. To protect the wellbeing of our employees and help curb the spread of the coronavirus (COVID-19), we are maintaining social distancing, using masks, and conducting our tours caravan style. To book a tour, please call the Antietam National Battlefield Museum Store at 301-432-4329. Note: Currently the Antietam Museum Bookstore is open Wednesday through Sunday, 9:00 am to 3:00 pm.