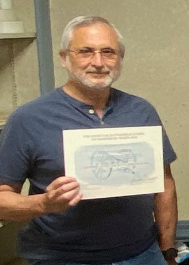 My interest in the Civil War began as a youth—probably when I was about 10 years old. I was too young to digest more factual books on the war, so I concentrated on picture books, such as the big American Heritage book on the Civil War.

Growing up in Philadelphia, the Gettysburg battlefield was the closest to my home. I would visit frequently, but when I was able to drive, I made my first trip to the Antietam battlefield. I always felt a special connection with these fields and returned as often as I could. I earned my degrees, started a family, and took jobs in the Midwest. A decade passed without visiting the battlefield. My family drove back to Philly for a wedding and I saw the sign to the battlefield, so we got off Route 70 and headed to the Visitors Center. One of my lasting memories is my five-year-old daughter in tears when she saw the movie. She got it. She understood what these men sacrificed and it moved her deeply. I was proud that it was not merely a superficial experience for her.

As a trained scientist, I study things, and after I earned my doctorate, my studies mainly involved biological topics, but with a family, it became easier to study something I could do at home. That launched my study of the Civil War. Fourteen books later, I am still learning, but now concentrate on map studies and, of course, Antietam.

Brad giving a tour in front of the Dunker Church

After retiring in 2017, I looked around for things to do and noted that I could be an Antietam volunteer.  I joined and also became an Ambassador.  It was just a natural progression to become a guide. I now return to the battlefield frequently. Yet, I never lose my awe of what it must have been like to fight on that blood-soaked day for something these men deeply believed in. Walking the fields never becomes common-place or routine and I learn some new perspectives every time I visit. There are so many stories, so many things to learn, that it would take a life-time and more to truly understand the battle. As a life-long student, Antietam has become a wonderful teacher.