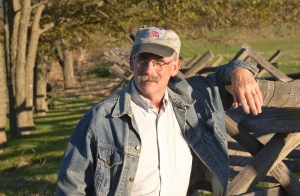 Growing up in Baltimore County during the Civil War Centennial, I was always fascinated by Civil War history, and moving to Washington County in 1978 only elevated that interest. I began volunteering at Antietam in the summer of 1979 and was immediately captivated by the beautifully evocative landscape and the remarkable level of preservation for that time.  With friendly and accommodating National Park Service staff, I soon felt like part of the family. While places like Gettysburg attracted more people, I knew Antietam was a special place.

As I began to seriously study the battle other aspects of it became apparent to me. Although book-length studies of the battle existed, there was still much to be discovered. Many old myths and misperceptions lingered. My friend and fellow historian Brian Pohanka was the first to encourage and guide me on my path to discovering more about Antietam, and the men who fought and bled there. One of these myths or misperceptions he made me aware of was that Gen. George B. McClellan was not the bumbling fool most historians believed.

I thought there was more about Antietam that needed to be told. Civil War historian and professor Dr. Joseph Harsh, who I met in 1990, greatly enhanced this belief.  I was privileged to not only have him as my academic advisor but also to read and critique the manuscript of his trilogy on the Confederate strategy in the Maryland Campaign. His passion for Antietam inspired me to edit and annotate Ezra Carman’s massive manuscript history of the battle. Carman served at Antietam as the commander of the 13th New Jersey Volunteer Infantry and Antietam’s first official historian.

The more I studied Antietam the more captivating it became to me. So many aspects of the campaign, the war, and politics were decided at Antietam. Lee’s first invasion of the north was defeated, ending perhaps the best chance for Southern independence; the intervention of foreign powers was eliminated by Lee’s failure; and McClellan’s victory allowed President Lincoln to issue the Emancipation Proclamation. Antietam can thus be seen as arguably the turning point of the war.  After forty years of studying Antietam as a volunteer, guide, and historian there is still much to discover. Sharing these discoveries with our visitors is one of the greatest privileges and joys of my life.

Tom has edited Ezra Carman’s manuscript into a three-volume set.