Thoughts on the North Woods

This post is the first of what we hope will be many more where our guides will be contributing content to our new website. We want to do a better job of reaching out to visitors, telling them about our experiences at Antietam, and why this is such a special place for us. Below, you will find a short piece written by Antietam guide Jim Rosebrock. Jim is our new head guide, and he also spends quite a bit of time volunteering at Antietam. We asked Jim to share a few thoughts on his favorite place on the battlefield. He chose the North Woods, at Park Tour stop 2. We hope you will enjoy hearing from Jim, and in the future, from our other guides as well.

I am a relative youngster when it comes to being associated with Antietam National Battlefield.  I started as a volunteer five years ago and have been a guide for the past four years.  People often ask me if I have a favorite place on the field.  As a volunteer, I have the privilege to be a battlefield ambassador; I position myself out on the field to talk to visitors and answer questions.  Sometimes, I provide brief presentations on the place where I am stationed. The Cornfield, Sunken Road, and West Woods were always well covered, so I decided to make the North Woods my usual place.  This spot does not get as many visitors stopping by, but I see lots of hikers on the Cornfield Trail and many bicyclists on the park tour roads.  And people do stop if they see a volunteer there. I learned about the Joseph Poffenberger farm and the family that lived there and over the years I watched the progress on the renovation of the barn and farm buildings.  The other thing about the North Woods is that is where this terrible struggle at Antietam began.  The Union First Corps was massed there.  Joseph Hooker and George Meade slept in the Poffenberger barn, and from the edge of the North Woods, they saw the Dunker Church in the fog and mist and made it their objective.  From Nicodemus Heights south and west, Major John Pelham’s artillery opened fire on the Black Hat Brigade as it formed for its attack.  Clara Barton’s monument is there as well. 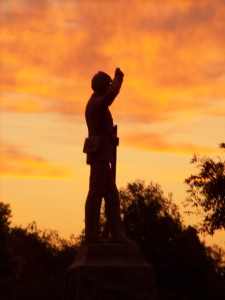 On battlefield anniversary, before I go to the Cornfield to observe the opening program, I travel to the North Woods and contemplate the costs of this battle and its impact on our history. Soon, as I understand, there may be civilian historical interpreters at the Poffenberger Farm on weekends.  My “spot” on the field is the North Woods. In fact, three years ago, I began a blog called South from the North Woods.  While most of our standard tour programs don’t have time for a stop at the North Woods, I always include it for longer tours.  If you’re in the neighborhood, usually on a Sunday afternoon stop by the North Woods and I will be happy to show you around.