Good news! No matter which 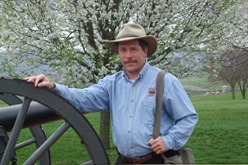 guide you select, you will receive a well-rounded tour of the Battle of Antietam. Every guide has researched and walked the fields around Sharpsburg for years.

In addition to a sound overview of the battle, I like to emphasize the human interest stories. Who were the men that were fighting? What type of weapons did they use? What did they witness?

I also like specialty tours. If you had an ancestor who fought with a particular unit, I can highlight that unit during the tour.

I am open to various forms of transportation on tours: cars, buses, bicycle, segways, horses, carriages, and walking.

My interest in the Civil War began as a child. My father would take me to battlefields such as Antietam, Gettysburg, and Shiloh. I always considered Antietam my home battlefield because I live close-by in Hagerstown.

You can’t see the rolling hills and uneven terrain in a book. The best way to learn about the Battle of Antietam is to get out on the field.

If you are having a bad day, just think about the brave soldiers who fought at battles such as Antietam. I have never experienced a day as bad as those soldiers did.

I hope to see you soon!